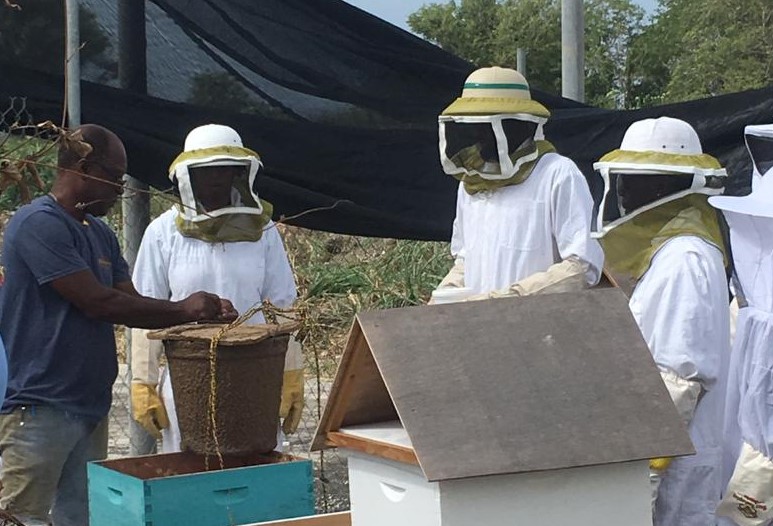 Castries, Saint Lucia, November 6, 2019 (IICA) - The authorities of Saint Lucia give final touches to the preparations for the next visit of two Argentine experts in the framework of API Caribe, a regional project of the Inter-American Institute for Cooperation on Agriculture (IICA) and the government of Argentina to boost the beekeeping industry of the Caribbean nations.

Gustavo Martínez Pandiani, Argentina’s Ambassador in Barbados, Saint Kitts and Nevis, Saint Lucia and the Organization of Eastern Caribbean States (OECS), visited Saint Lucia this week to meet with representatives of the Ministry of Agriculture, beekeeper organizations, IICA and other interested parties to finalize details of the visit.

Argentine experts Elian Tourin and Liliana Gálvez will arrive in the city of Castries in early December to begin the training of local beekeepers and tour the apiaries of St. Lucia.

"We identify beekeeping as one of the priorities in the region. The objective of the program is to provide, in addition to technical efficiency for honey production, better strategies for commercialization and marketing," said Ambassador Pandiani.

"We see that, many times, the main challenge is how to sell honey and how to prepare for export. Given the cost of importing food products in Saint Lucia, as in other parts of the Caribbean, this project means a great initiative for the island to start exporting honey instead of importing it", he added.

API Caribe began in July 2019 and is developed through cooperation between the government of Argentina, IICA and the Ministries of Agriculture of four Caribbean countries: Barbados, Dominica, Saint Lucia and Saint Kitts and Nevis.

Argentine specialists will facilitate the installation of Perone hives, whose performance is greater than the Langstroth hives, traditionally used in those countries.

The high vulnerability index of the Caribbean countries in the face of extreme weather events and the great potential of beekeeping to generate socio-economic benefits in the rural communities of the Caribbean make API Caribe an attractive opportunity to improve economic sustainability.