The Rice: A staple food in the Dominican Republic

The Rice:  A staple food in the Dominican Republic

Rice (Oryza sativa) is the second most important food worldwide after wheat and is the staple food for half the world 's population. The global rice production in 2016 was 472.25 million tons, China (144.9 TM million) and India (106.5 million the largest producers, followed by Indonesia (37.2 TM million) and Blangladesh (34.6 TM million) (https: Http://www.produccionmundialarroz.com; IDIAF).

The Dominican Republic is considered a self-sufficient country in rice production; a basic crop in the Dominican people's food according to the Ministry of Agriculture, of a total estimated consumption of 12.4 million quintals per year, the country maintains an average production of about 11.2 million quintals and an import of only about 421,000 quintals (2005-2013). Rice production in the country maintains a yield average of 4.23 QQs / tarea (1 tarea = 15.9 ha) with a per capita consumption in the country being about 127 pounds, one of the highest consumption averages in Latin America.

Rice production is under irrigation (98% of production) by approximately 30,000 producers, covering an area of ​​2.9 million tareas of this total of producers, 45% correspond to parcelers of the Agrarian Reform, in small plots of between 20 to 75 tareas. The remaining 55% of rice producers are private sector farmers.

According to the territorial division system used by the Ministry of Agriculture, the country has eight agricultural regions: North, Norcentral, Northwest, Northeast, East, Central, South and Southwest.

The main rice varieties grown in the country are Prosequisa-4, Prosequisa-5, 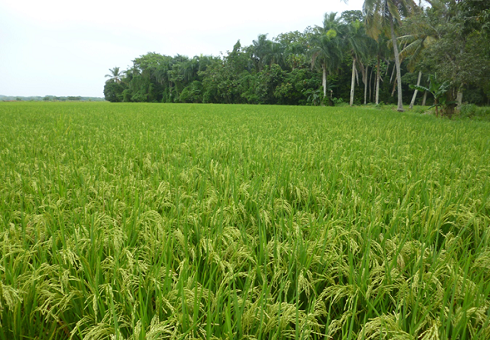