Current situation of coffee production in the Dominican Republic 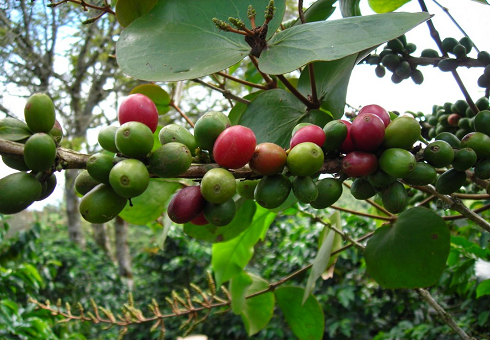 The effects of Coffee Rust (Hemileia Vastatrix) on coffee plantations in the Dominican Republic have forced the authorities and technicians of the Dominican Coffee Council (CODOCAFE) to develop a work plan and strategies in which In the last three years, 2,876 nurseries, in which coffee rust-resistant plants are produced, which are distributed to small producers throughout the country in order to renew and recover the production of domestic coffee. These new varieties of plants are acquired in Brazil, Honduras and El Salvador.

However; Local plants are also used which have been detected levels of tolerance to coffee rust and that have been identified in several communities of the country, such as San Cristóbal, Baní, San José de Ocoa, Enriquillo Region (composed of the provinces of Barahona, Pedernales, Bahoruco and Independencia), Juncalito in Santiago de los Caballeros, the Monte Bonito area of ​​the Municipality of Padre Las Casas, Azua Province and the east side of San Juan de la Maguana.

From 2013 to 2016, CODOCAFE has managed to produce more than 64 million plants with varieties resistant to coffee rust with high production potential. During that period, more than 117,000 tasks (7,312.50 Has.) Have been renewed, in which 5,710 producers have benefited.

The renovation of coffee plantations and the implementation of nurseries have had an approximate cost of RD$ 877 million (US$18,659,574) from 2013 to date, according to CODOCAFE information. Currently there are one million 600 thousand tasks (100,000 Has.) Planted coffee in the whole national geography. 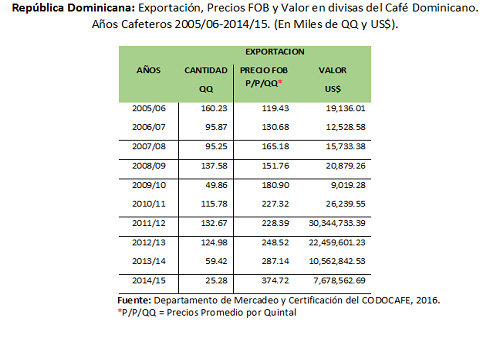 These data reveal the losses recorded in the Dominican coffee subsector with prices in the international coffee market that are rising, comparing the 2012/13 harvest with 2014/15.

By January 2016, the average percentage of Roya incidence in the Dominican Republic was 35.82%. Percentage that is distributed by province in the following graph.