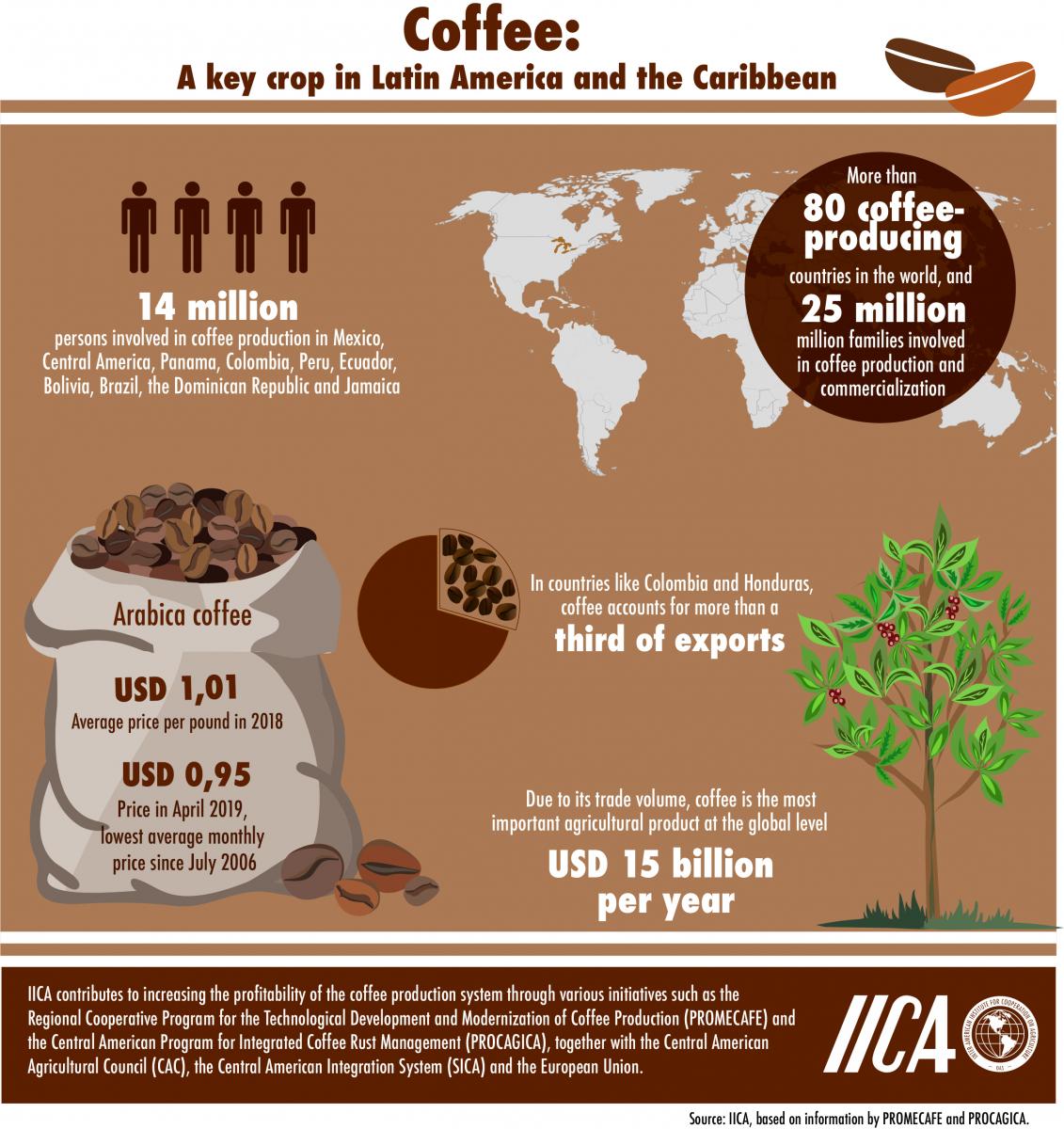 San Jose, 13 May 2019 (IICA).  The Director General of the Inter-American Institute for Cooperation on Agriculture (IICA), Manuel Otero, expressed concern over falling international prices for coffee, and warned of its negative economic, social and productive repercussions, particularly in countries where coffee plays a relevant role with respect to exports and generating employment opportunities.

The current price situation, which impacts more than 80 coffee-producing countries around the world, and coffee-farming families in particular, has a profoundly negative effect, causing a considerable reduction in the use of technology and agricultural supplies, which, in turn, leads to an insufficient application of good practices for the comprehensive management of plantations.

Around the world, close to 25 million coffee-producing families are currently unable to cover production costs, overcome debts, maintain employment levels or tend to their crops with the minimum investment required for farming, which will lead to a greater number of pests and lower productivity levels.

In 2018, the average price of a pound of Arabica coffee of the highest quality was 1.01 dollars. In April this year, the price plummeted to less than 0.95 dollars, the lowest average monthly price since July of 2006.

The persistently negative outlooks and limited response to these scenarios weaken the resilience of rural families that depend on coffee production to live,” stated the Director General of IICA.

“Under this scenario, no type of agricultural activity is profitable; as a result, it is not possible to guarantee the sustainability of coffee production. This causes producers to become more heavily indebted and generates sizable migration flows from rural areas towards urban centers or other countries in pursuit of better opportunities,” remarked Otero, who leads the hemispheric agency specializing in agriculture and rural development.

The head of IICA called upon the coffee agroindustrial chain, the private sector and governments to commit to identifying swift, long-term solutions.

“The sector requires the activation of mechanisms that foster more equitable trade and guarantee the profitability of coffee-farming through greater income for producers. These mechanisms, in turn, must be complemented by responsible alternatives for diversifying production, which would contribute to mitigating the impact of coffee price volatility, generating income, and improving food and nutritional security for millions of coffee producers around the world, and in Latin America and the Caribbean in particular,” explained the Director General of IICA.

Mexico, Central America, Panama, Colombia, Peru, Ecuador, Bolivia, the Dominican Republic and Jamaica are particularly affected by the low international prices, given the fact that roughly 14 million people in those countries are involved in coffee production or commercialization.

In Colombia and Honduras in particular, coffee accounts for more than one-third of exports; as a result, falling prices have had a significant impact on jobs and income, prompting migration flows. Faced with these concerns, producers from 35 countries in Africa and Latin America have urged the industry to increase purchase prices to avoid a “humanitarian crisis,” calling for coordinated international action.

With resources from the European Union, IICA is working together with coffee institutions in several countries to boost the profitability of the coffee production system, channeling intensive efforts towards strengthening productive transformation and innovation processes, for the benefit of its member countries.

Due to its trade volume, coffee is the most important agricultural product at the global level, generating about 15 billion dollars per year.

“The price crisis is a pressing issue that is beyond the control of producers. There is an urgent need to develop policies that improve access to information and competitively-priced supplies, while also driving the renewal of plantations with more productive, early maturing crop varieties that are more resistant to pests and diseases. These policies should also stimulate the local market and add value based on quality and uniqueness,” concluded Otero.