By Dr. Priscila Henríquez, Specialist in the Management of Technological Innovation, IICA, priscila.henriquez@iica.int

Researchers from Argentina are spearheading an effort to improve beekeeping in Latin America through the implementation of public-private partnerships. It started with Argentina’s National Apiculture Program (PROAPI).

The effort began in 1996 at the Faculty of Veterinary Sciences in the Buenos Aires province. Researchers in close collaboration with their counterparts at the National Agricultural Research Institute (INTA) and other public entities developed an associative platform for collective innovation working with the beekeepers. The aim was to support them to improve the quality of their honey and thus access more profitable markets.

Financial support and credit were available to beekeepers provided they received technical assistance from INTA.

At the beginning, the consortium had to overcome many technical difficulties such as antibiotic resistance, and findings in Canada and Australia of Argentine honey contaminated with antibiotics linked to cancer. During the same period, the Argentinian economic crisis deepened after an abrupt 70 % devaluation in the currency that impacted the sector.

Despite the difficult situation, the PROAPI initiative kept going, providing beekeeping training to numerous groups and implementing distance education initiatives. Members of the consortium visited honey producing areas in the United States, Germany, New Zealand, and Brazil to learn the best technologies and practices. Back home, they adapted and modified these techniques to meet their local needs.

The backbone of this initiative is the network of more than 200 technicians distributed in the honey producing areas of Argentina who connect the researchers with the producers. Throughout the country there are now more than 400 producers groups linking some 15,000 beekeepers.

This collective way to spur innovation has resulted in honey of excellent quality. About 95% of production is currently destined for international markets and the country is now one of the world's three largest exporters. More importantly, honey production helps local economies because in some areas the activity is predominantly in the hands of small entrepreneurs.

Producers’ adoption of an innovative technological path that allows production without the use of antibiotics, with the implementation of quality management and traceability is the main achievement. This innovation has increased yields by 31.8% with only a 2% increase in costs. The next step is to differentiate the honey to give it more added value.

Also, a commercial pollination business is currently being established in the country. Plants requiring honey bee pollination are mostly fruits and nuts (almonds, apples, kiwis), vegetables (cucumber, squash, watermelon), forages and seeds (red clover, alfalfa), and oilseeds (sunflower, soybean and rape).  A challenge is the development of systems that will help both beekeepers and growers to take full advantage of bee pollination.

The initiative became international when links were established with the Dominican Republic, where honey production had serious limitations due to the lack of technologies and the limited organization of producers. There, the impact of the project has been even greater than in Argentina: producers report a 277% increase in honey production. After much work with producers, they are now integrated in the local value chain. The introduction of improved technologies for honey production, instead of the traditional way of using old tree trunks, has also additional benefits, making contributions to the recovery and sustainable use of forests. 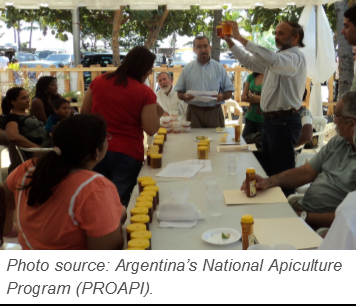 Last year, the Regional Fund for Agricultural Technology (FONTAGRO) awarded the consortium a prize as the most innovative public-private partnership in support of family agriculture in Latin America and the Caribbean in a competition that included experiences from all over the hemisphere. FONTAGRO with the support of IICA and the Inter-American Development Bank, seeks to promote research and innovation in 15 Latin American countries.

The consortium also received funding from FONTAGRO to continue expanding the work beyond Argentina and the Dominican Republic, to Costa Rica and Uruguay. This effort seeks to overcome the fragmentation of the honey producers and their difficulties accessing technology adapted to the different territories in these two countries. It is expected that the joint work of beekeepers, technical assistance providers and researchers will contribute to strengthening the sector.

In summary, Argentinian beekeeping has a lot in its favor, including a maturing history as one of the world market’s significant sources of honey. It has a rather young labor force comfortable using information technologies, and an ongoing government sponsored research and education initiative to help beekeepers improve productivity.

As this network is expanded in Latin America, we will surely hear more about this evolving innovation in the near future.

*The opinions expressed in this newsletter are those of the authors and they do not reflect the position of the Institute on the topics presented.